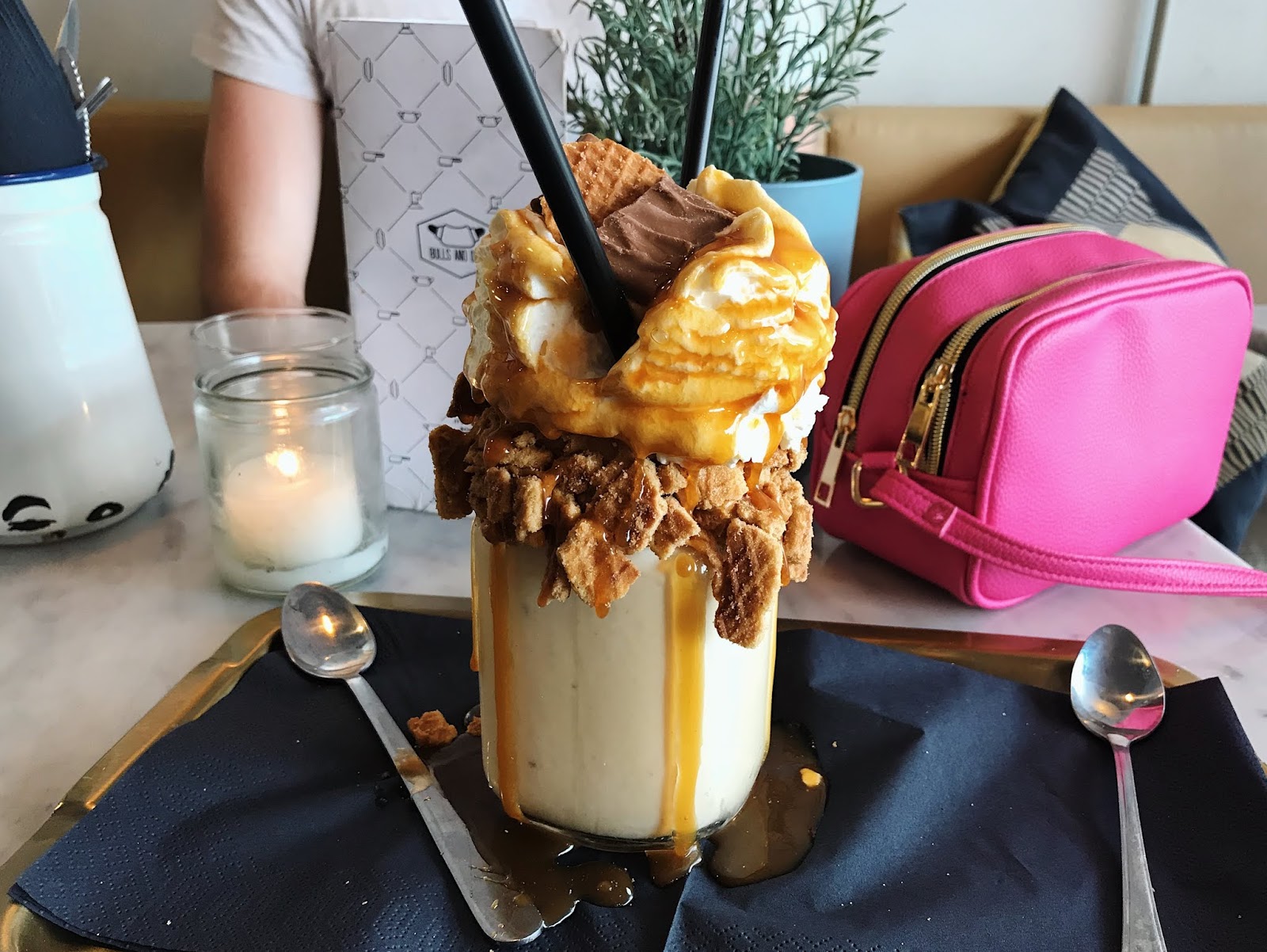 Back in May, myself and Dara went on our second trip to our favourite city, Amsterdam, and of course we ate all around us. There are so many amazing restaurants and cafes in Amsterdam that even after being there twice, we’ve only scratched the surface. Since my first Amsterdam food guide was so popular last year, I thought you may like another one with some of the new places we tried and loved on our trip. If you haven’t already seen the first Amsterdam food guide, you can read that here.

First up we have that glorious creation you can see above. Bulls and Dogs do some insane hot dogs, with seriously imaginative toppings but the main reason we checked it out was for their “Freakalious Milkshakes”. Now be warned, these milkshakes are not to be messed with and we struggled to finish one between us, but man was it delicious! Since we were in Amsterdam we decided to go for the ‘Dutch Cookie Wookie’ milkshake that was stroopwafel inspired and so delicious! We went to their Van Woustraat location which is in the very cool De Pijp area not too far from the Rijksmuseum and Oosterpark. 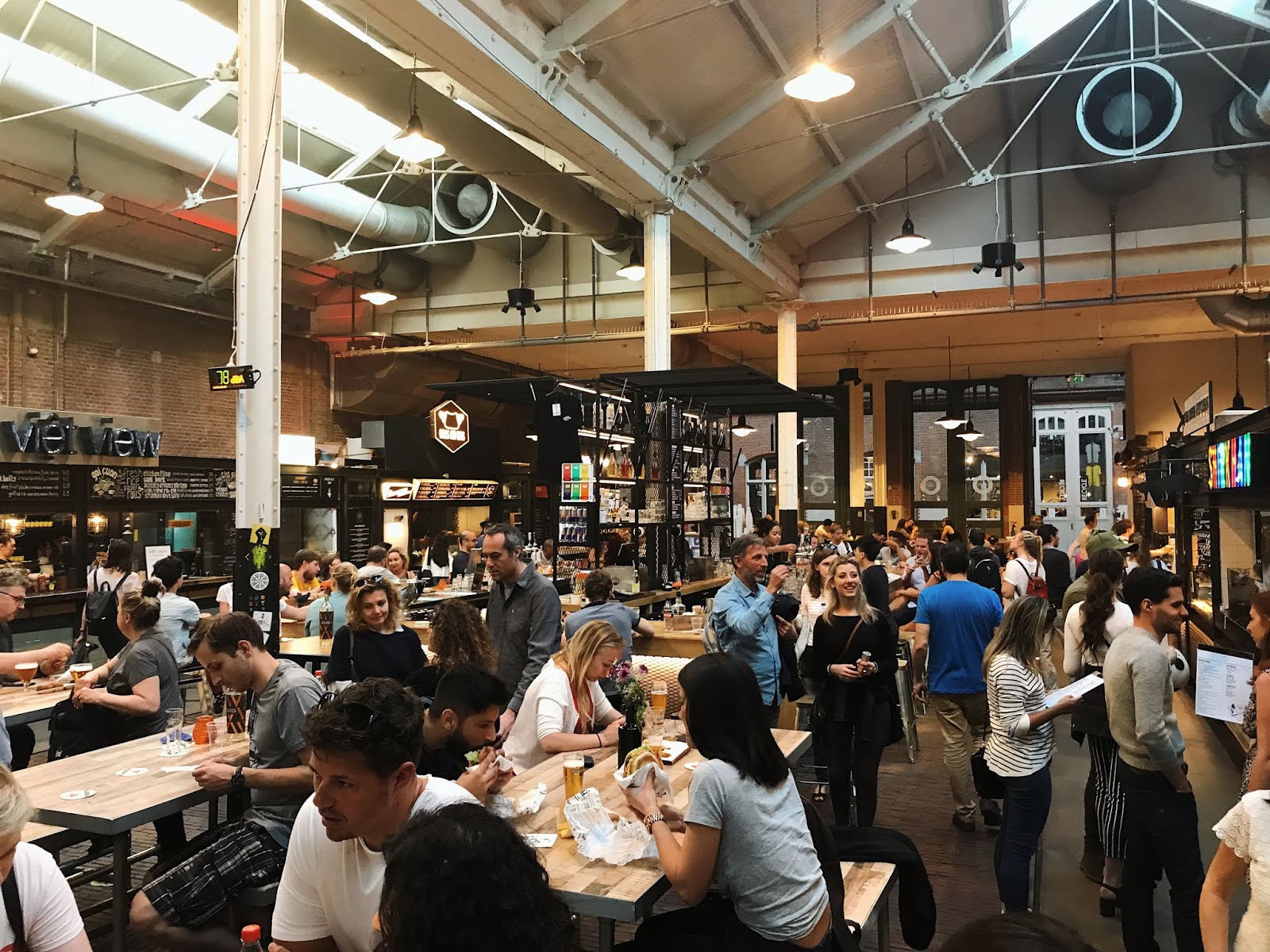 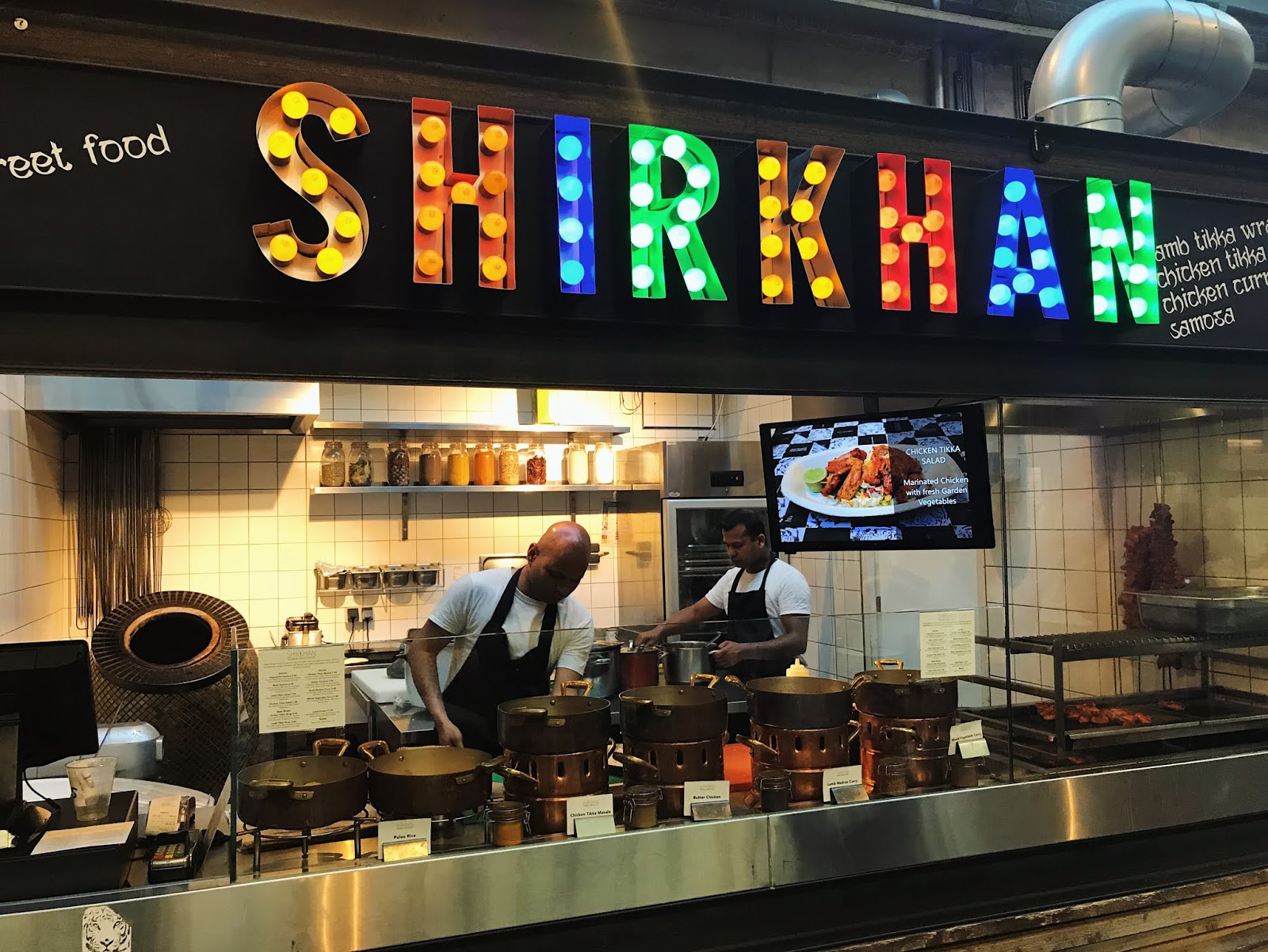 If you’re a foodie (I’m sorry I know some people hate that word, but hey, that’s what I am), then I strongly advise you to check out Food Hallen. We didn’t make it there on our first trip so it was top of my list of priorities for our second trip. Basically it’s a very cool food hall, filled with lots of independent food stands that serve the most delicious food. I could have honestly spent an entire day gorging myself and trying every stall, but the ones we actually got to try were Shirkhan, a stand that served delicious curries and The Rough Kitchen, which serves straight up dirty BBQ food (there’s no other way to describe it if I’m honest). Food Hallen would be a great place to go if you’re with a group of people who all like different kinds of food, or if you just want to try a little bit of everything. 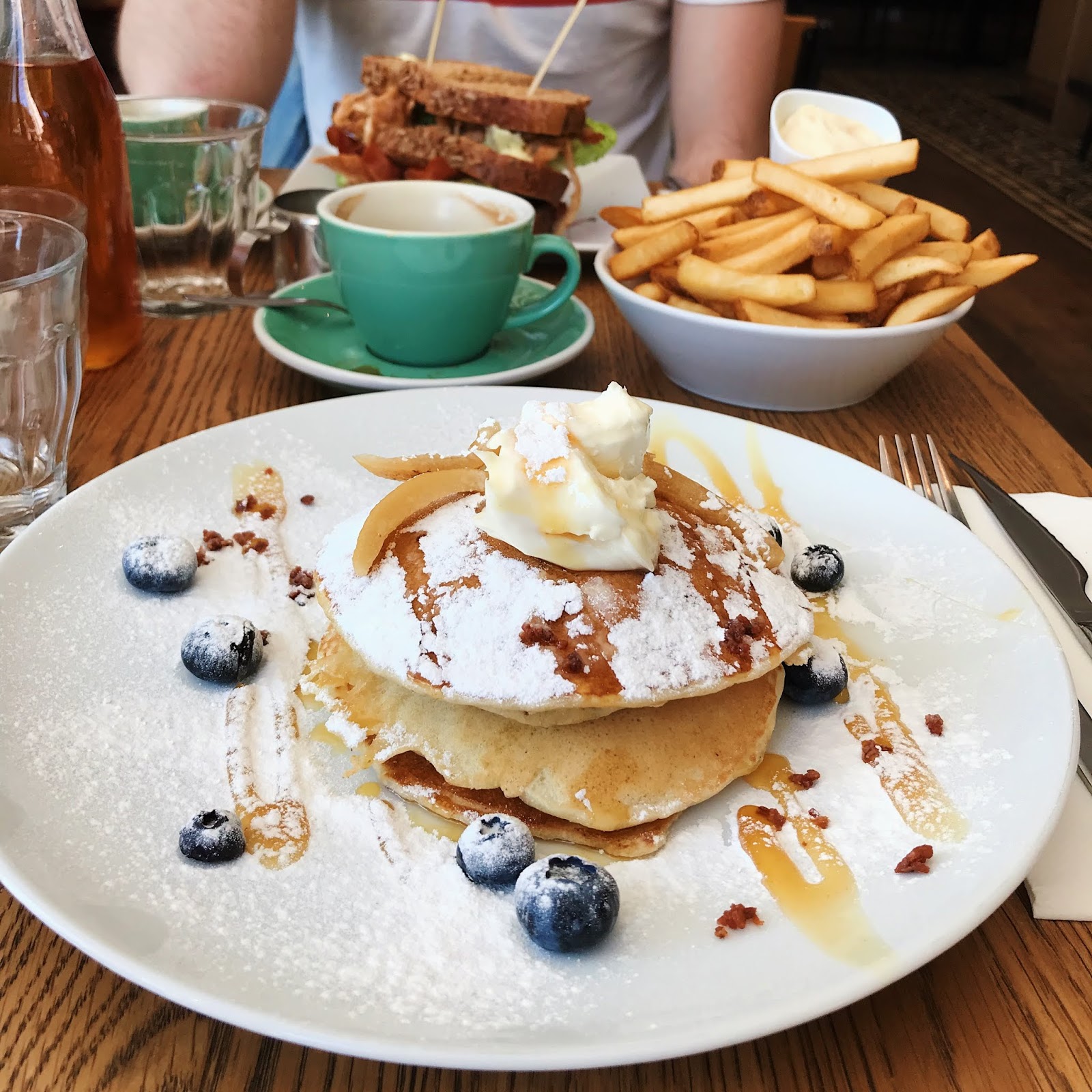 You’ve probably heard of The Breakfast Club already as they have quite a few locations all over the world. We tried out their Wibaustraat location as it was just a few minutes walk from our hotel (Volkshotel, aka one of my favourite hotels ever) and it definitely lived up to all of the hype I’d heard about it. I had the Blueberry Cinnamon Pancakes with lemon mascarpone, bacon syrup, bacon crumble and they were truly scrumptious! I also found that even though The Breakfast Club is always super busy, their prices are still fairly reasonable which is nice because sometimes a fancy stack of pancakes like that could cost well over €15 which is just a little bit too ridiculous for me. 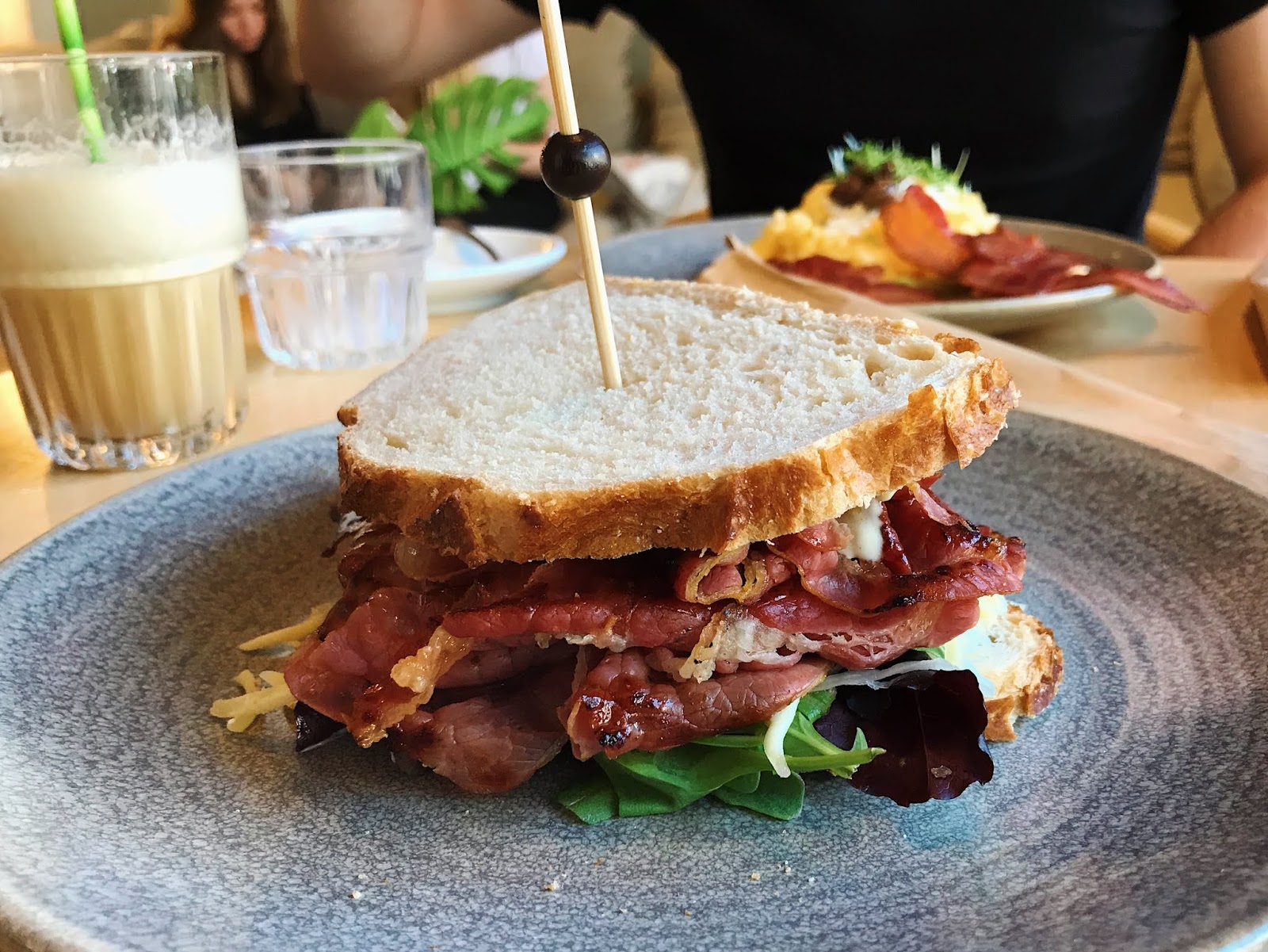 Another fabulous place for breakfast, brunch or lunch in Amsterdam is Coffee & Coconuts. They do dinner as well, but since we were there early in the day, I can only vouch for their brunch menu. Like Bulls & Dogs, this is also in the De Pijp area, right near the Heineken Experience. We went here for a late breakfast/early lunch on our last day in Amsterdam. As I’d eaten my body weight in sweet treats and pancakes for the entire trip, I opted for a savory option which is usually very unlike me, but it was delicious! I got the New York Deli Sandwich which was bursting with flavour and was quite possibly one of the biggest sandwiches I’ve ever eaten. I also had to try their Coconut Coffee which was made up of two shots of espresso, coconut milk and agave and was so refreshing 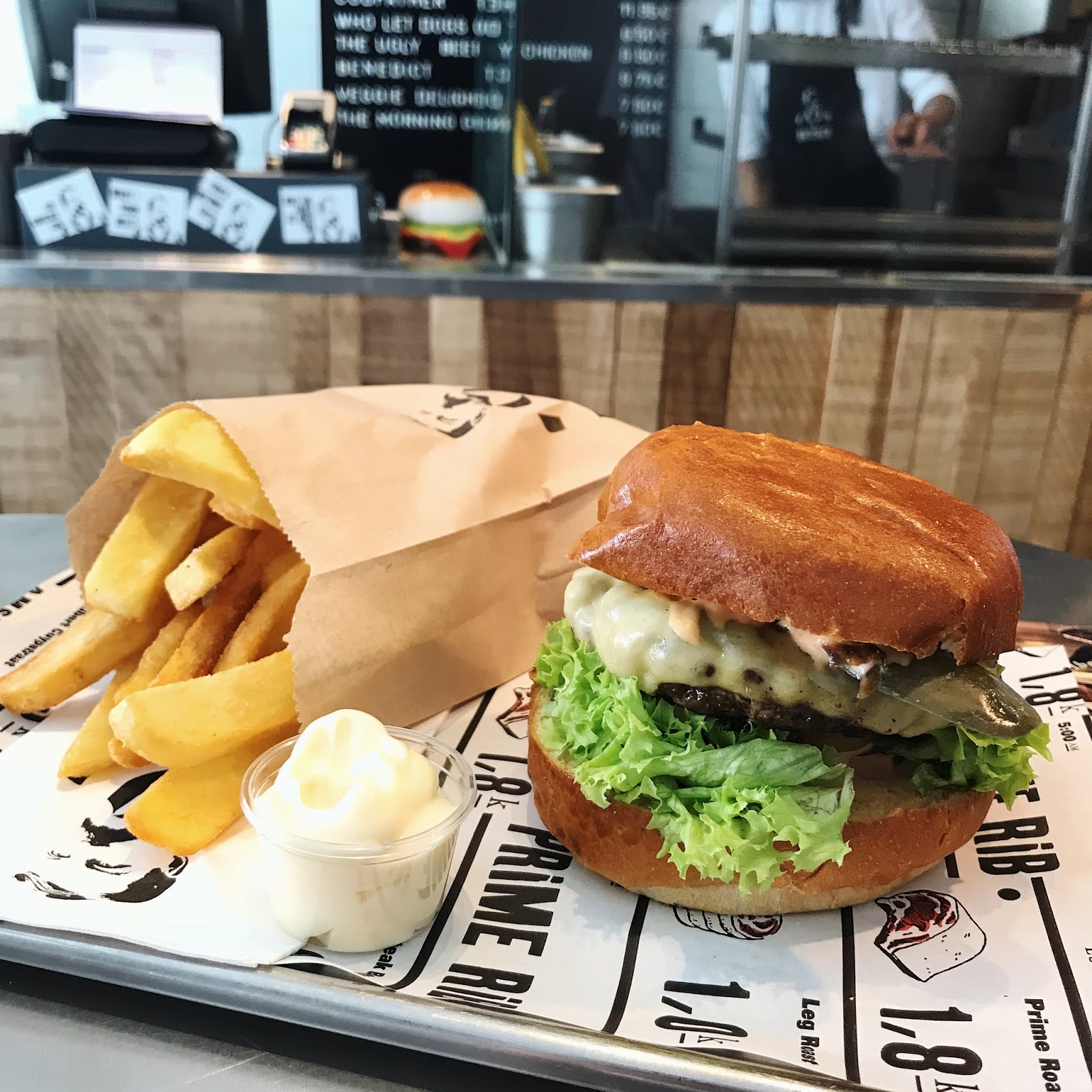 If you’re into burgers, then you definitely need to check out The Butcher if you’re ever in Amsterdam. We went to their Albert Cuyp location, which is again in the De Pijp area (it’s probably the best part of Amsterdam) but to be honest I’d recommend going to their Nine Streets restaurant instead, as the one we went to was tiny, and there was only about 8 seats. Small seating space aside, the food in The Butcher was super tasty and I loved the novelty of being able to see our burgers being cooked on the grill right in front of us.

10 Summer Trends That Are the Definition of "Pretty"