Penneys To Prada – A Fashion, Beauty & Lifestyle Blog: Escape To The Wicklow Mountains 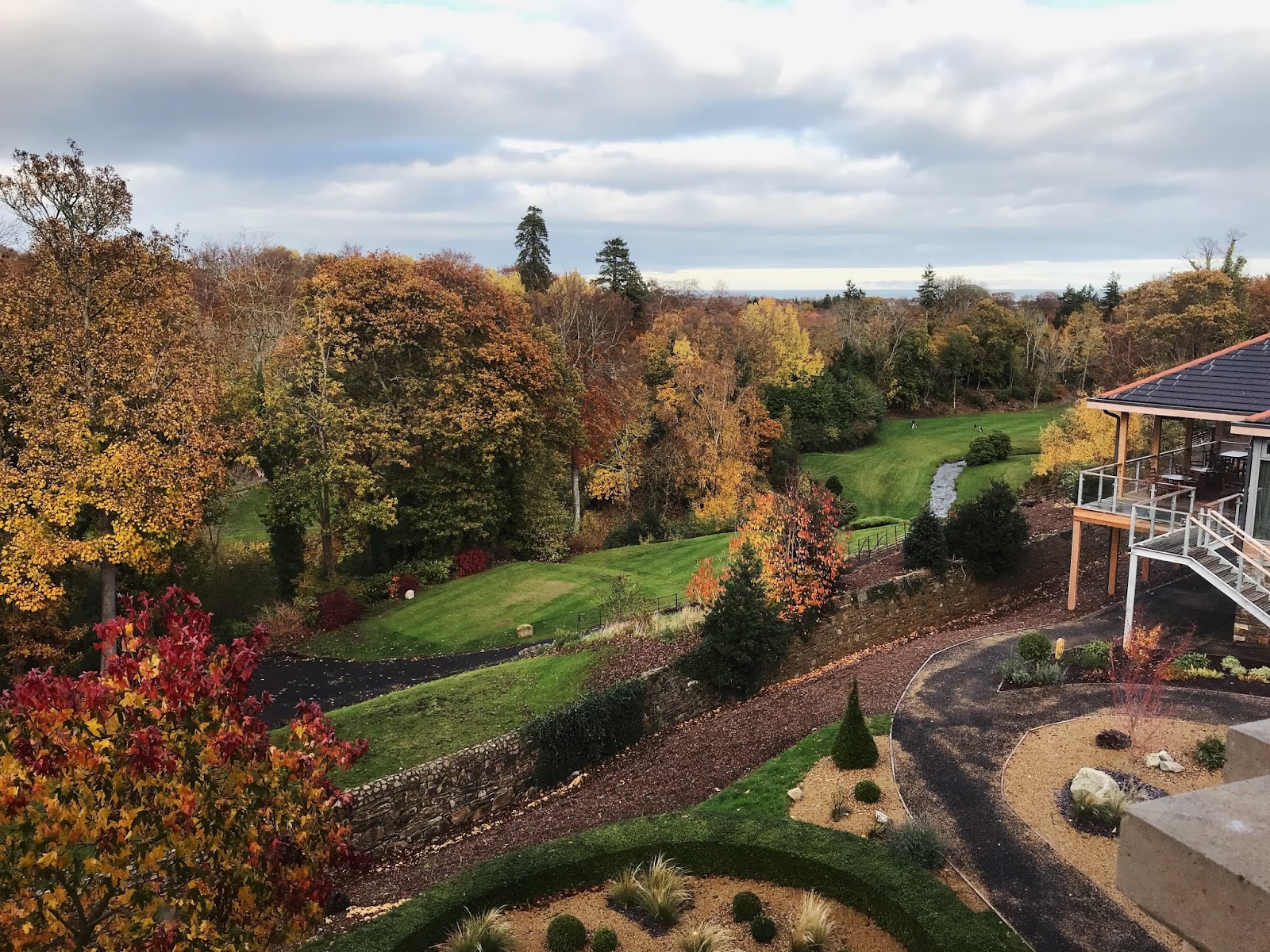 Isn’t that just one of the most stunning views from a hotel window that you ever did see? It’s certainly the best view I’ve ever had from a hotel room and I could have sat there all weekend looking at all of the autumn leaves! This past weekend myself and Dara headed up to Wicklow for a bit of R&R and were lucky enough to be guests of Druids Glen Resort, a hotel that I’d already heard such amazing things about. It took us about 2 hours to drive up from Waterford, and even the drive itself through Wicklow to the hotel was stunning. Upon walking into the hotel lobby, straight away I fell in love with the decor, and how bright and open the hotel was. It also helped that at the reception desk there was a warm non-alcoholic apple cider that was literally the most delicious, soul warming drink I’ve ever had (I actually need to find out the recipe)! Since we arrived just before 3pm, we expected to have to wait a little for our room as check-in wasn’t until 4pm but to our delight, our room was ready and waiting, and it did not disappoint! 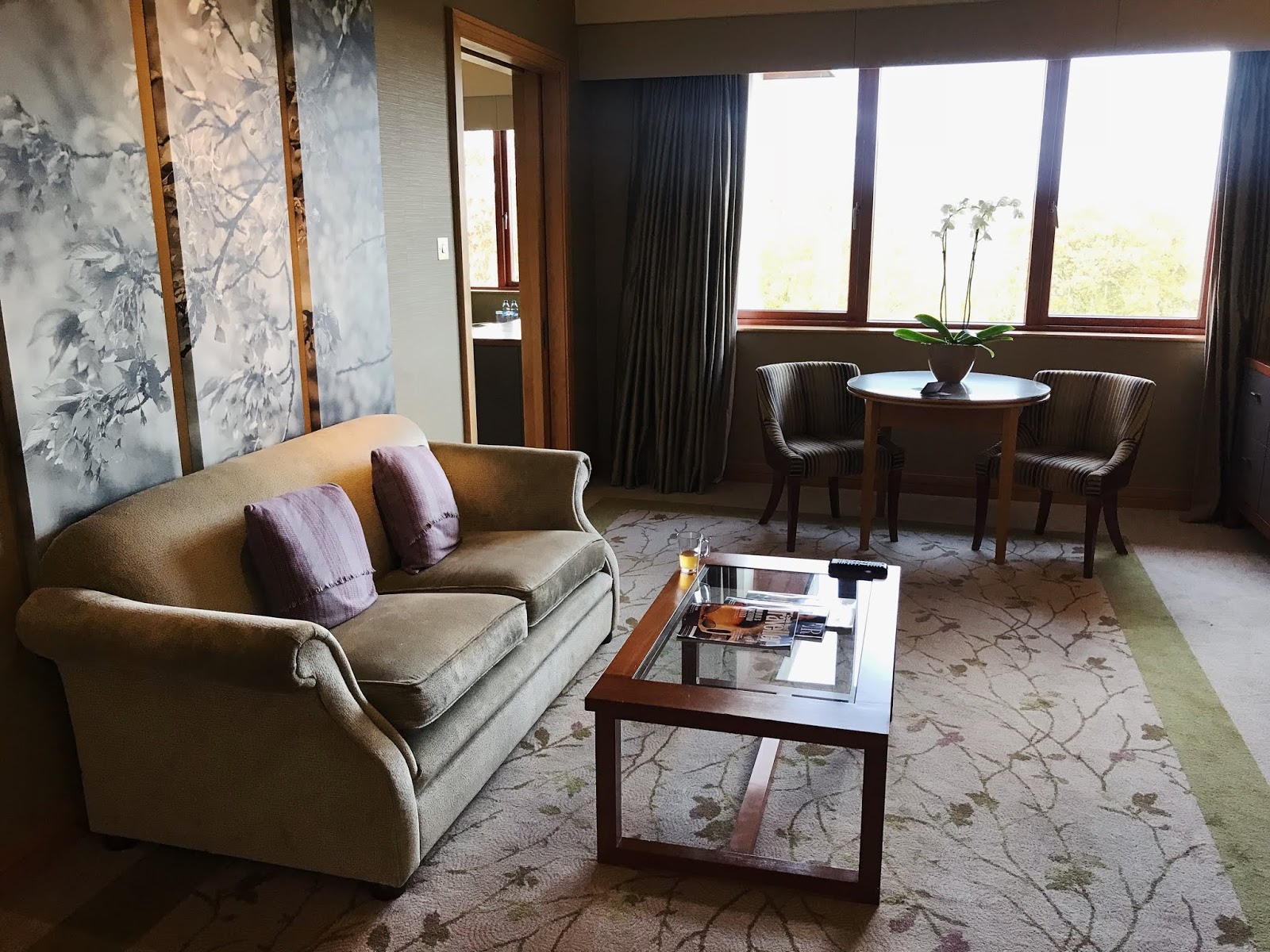 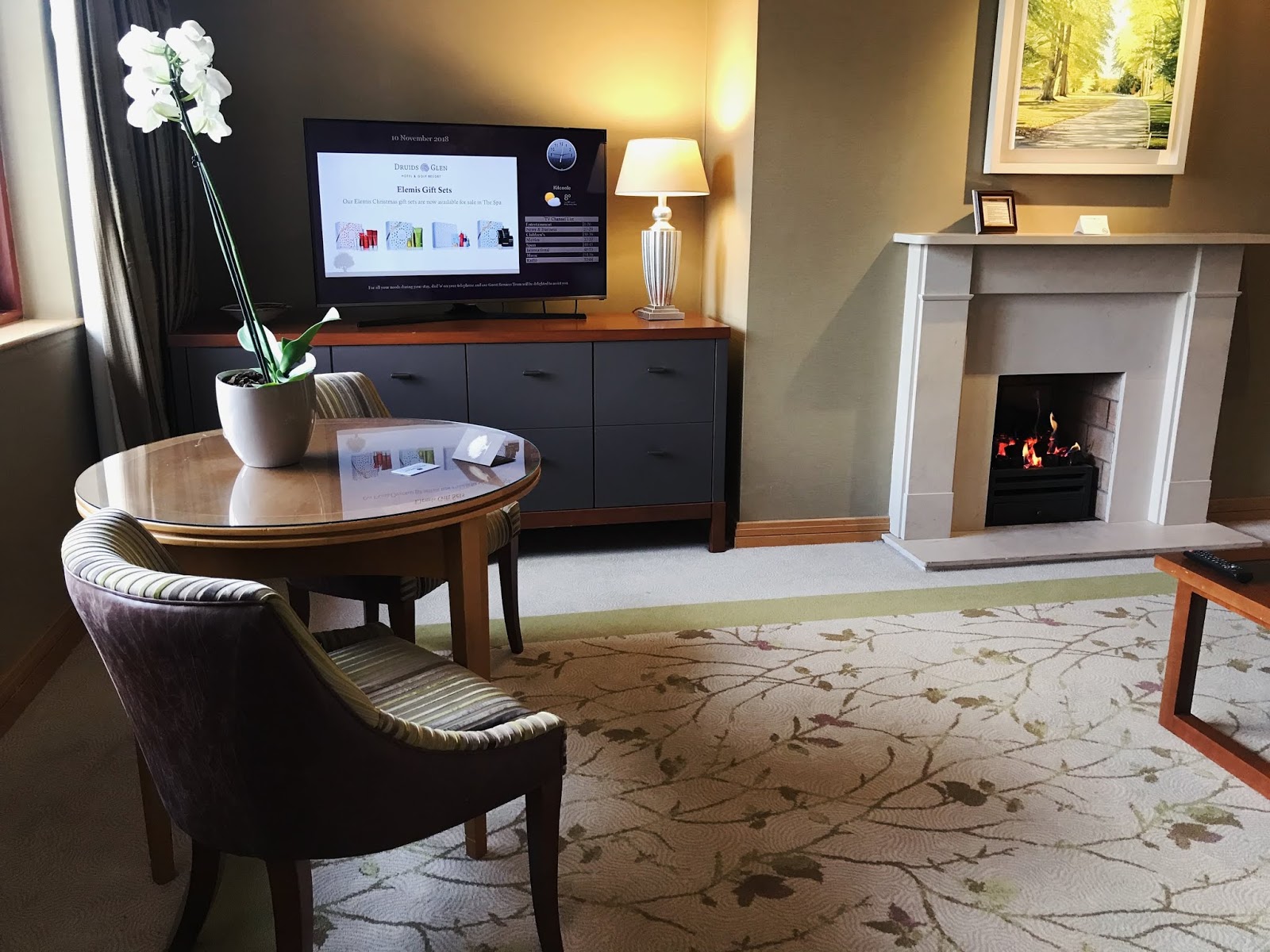 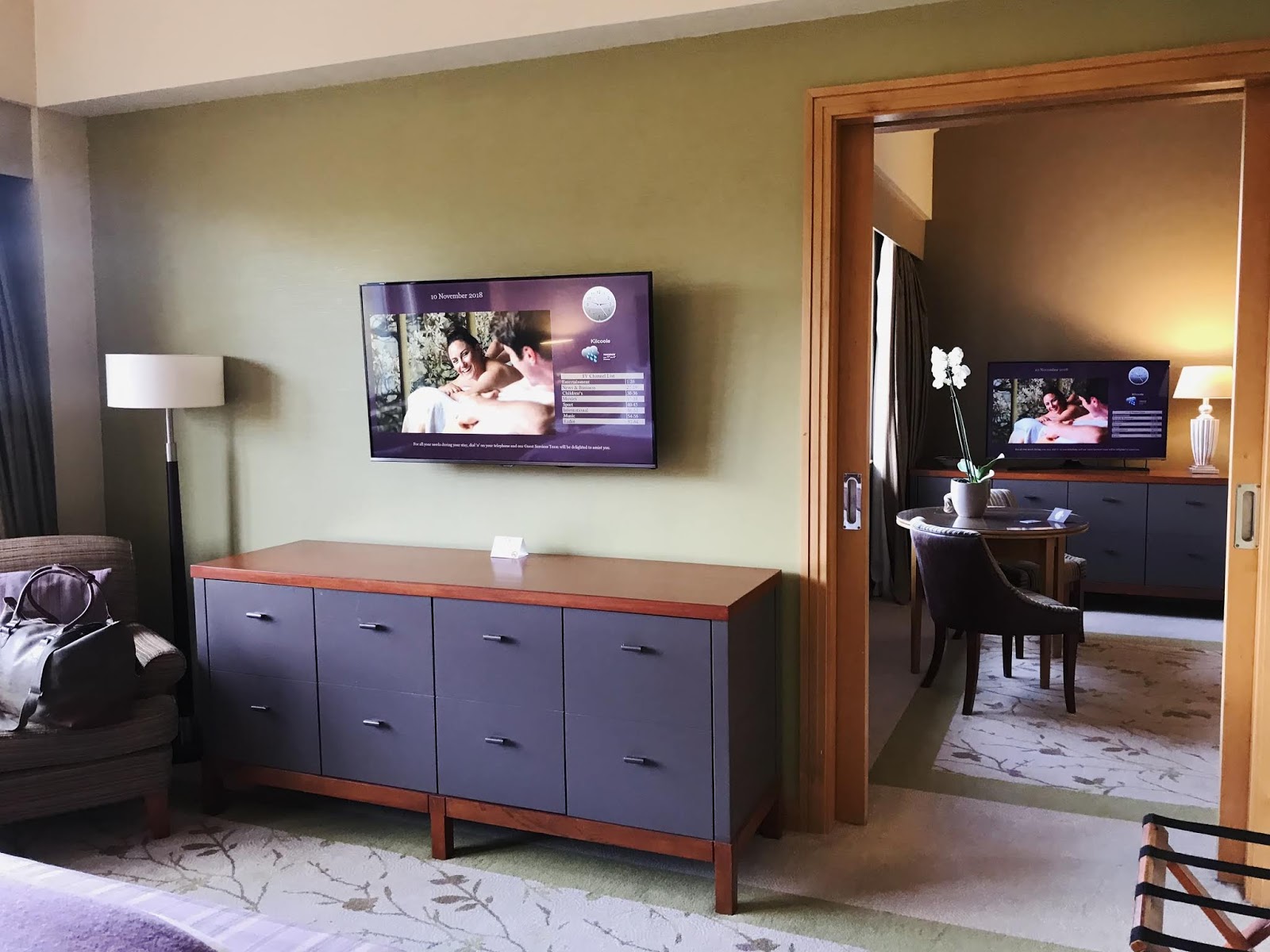 Originally we had been booked into a Superior King Guestroom which we were so excited about but just a few days before our stay, I got an email to say we’d now be staying in the Executive Suite and like I said above, it did not disappoint! After we’d checked in, we headed up to the third floor and found our room which had double doors, and I don’t know about you, but I’ve never stayed in a hotel room with double doors. Upon opening those doors, we walked into the suite’s sitting room which had an open fire already burning and I just totally fell in love. It was so cosy and welcoming and exactly what you’d want for a relaxing weekend away. As well as the fire, the sitting room had a comfy little couch, a table and chairs and a big tv, which would be perfect for a movie night. 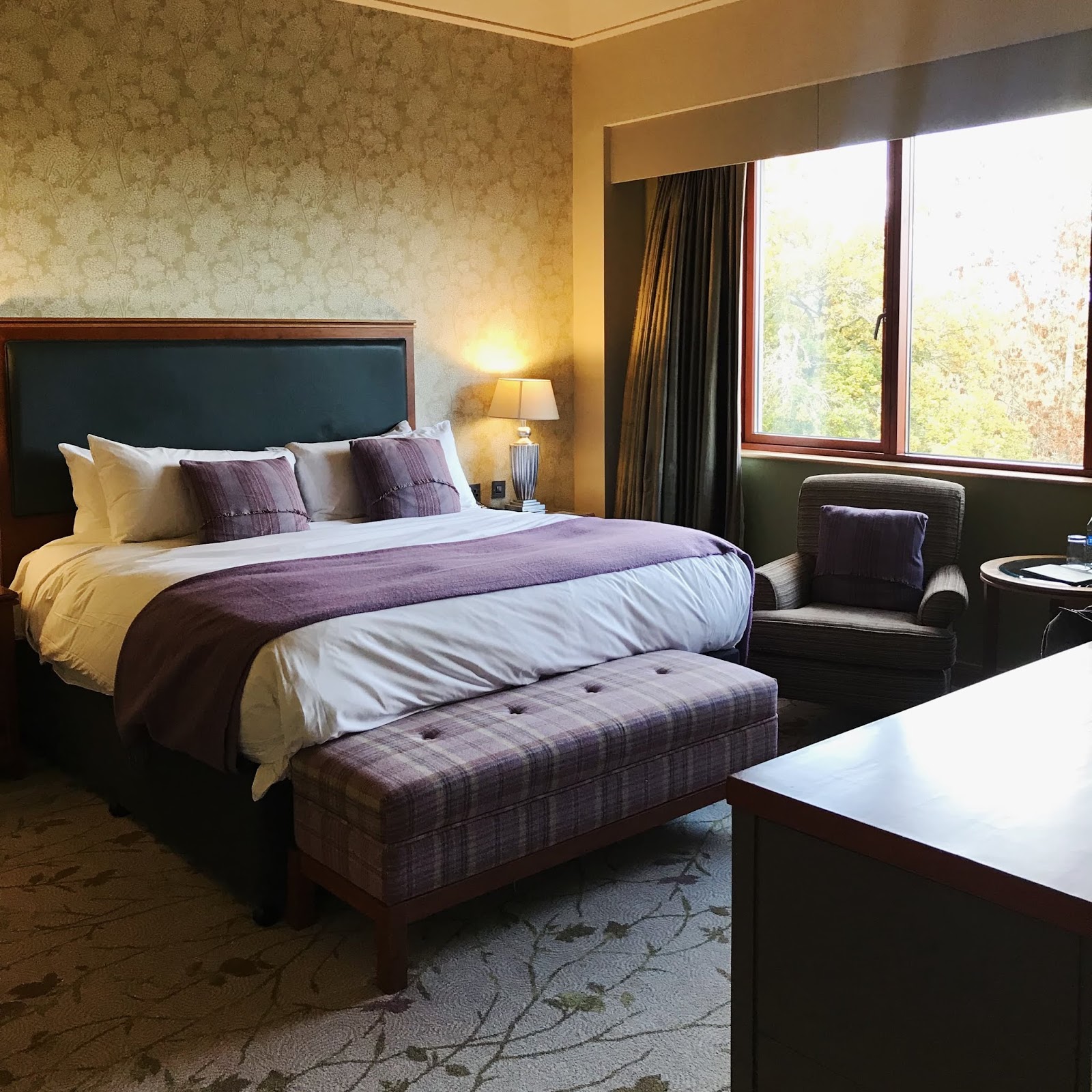 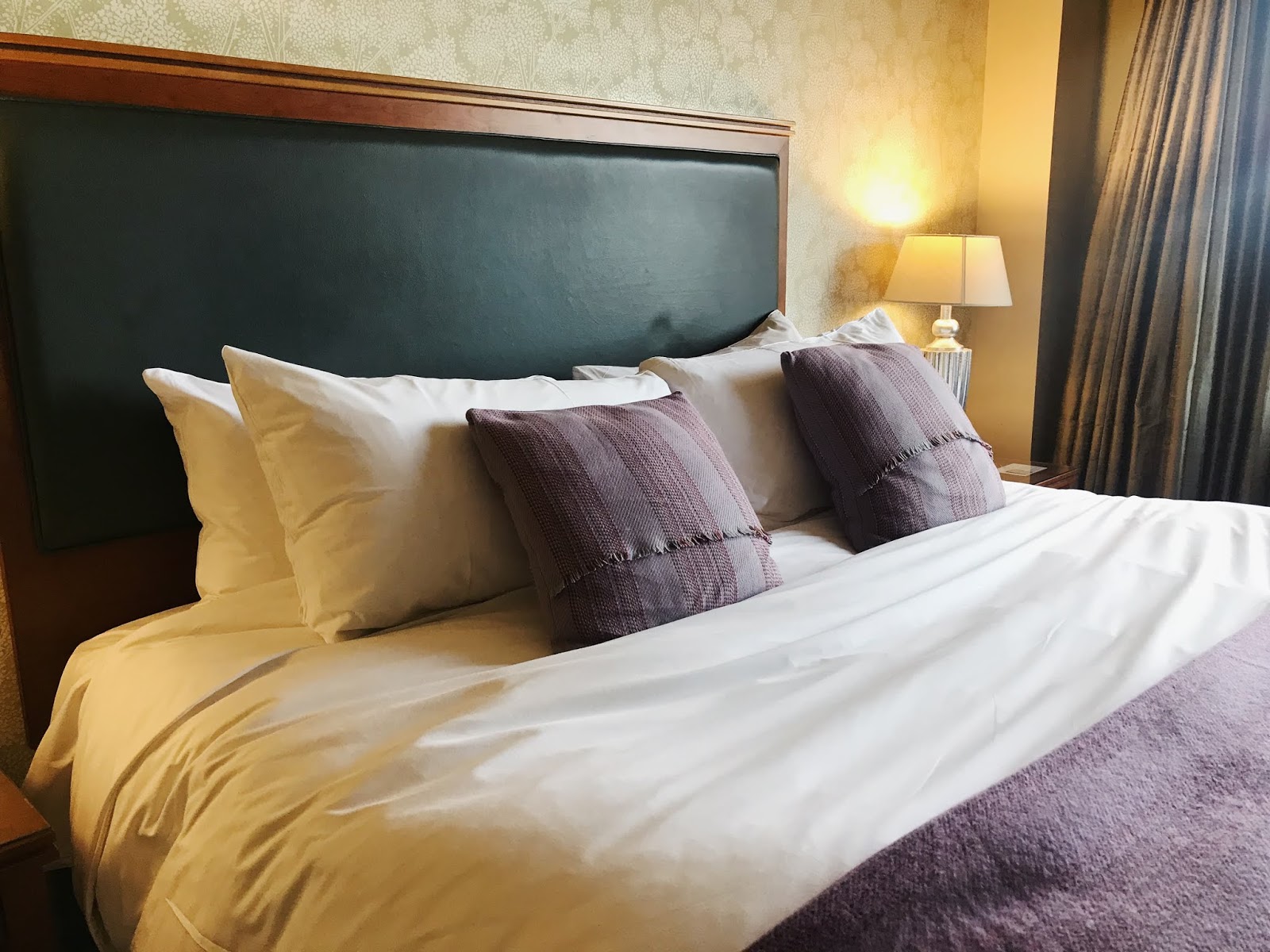 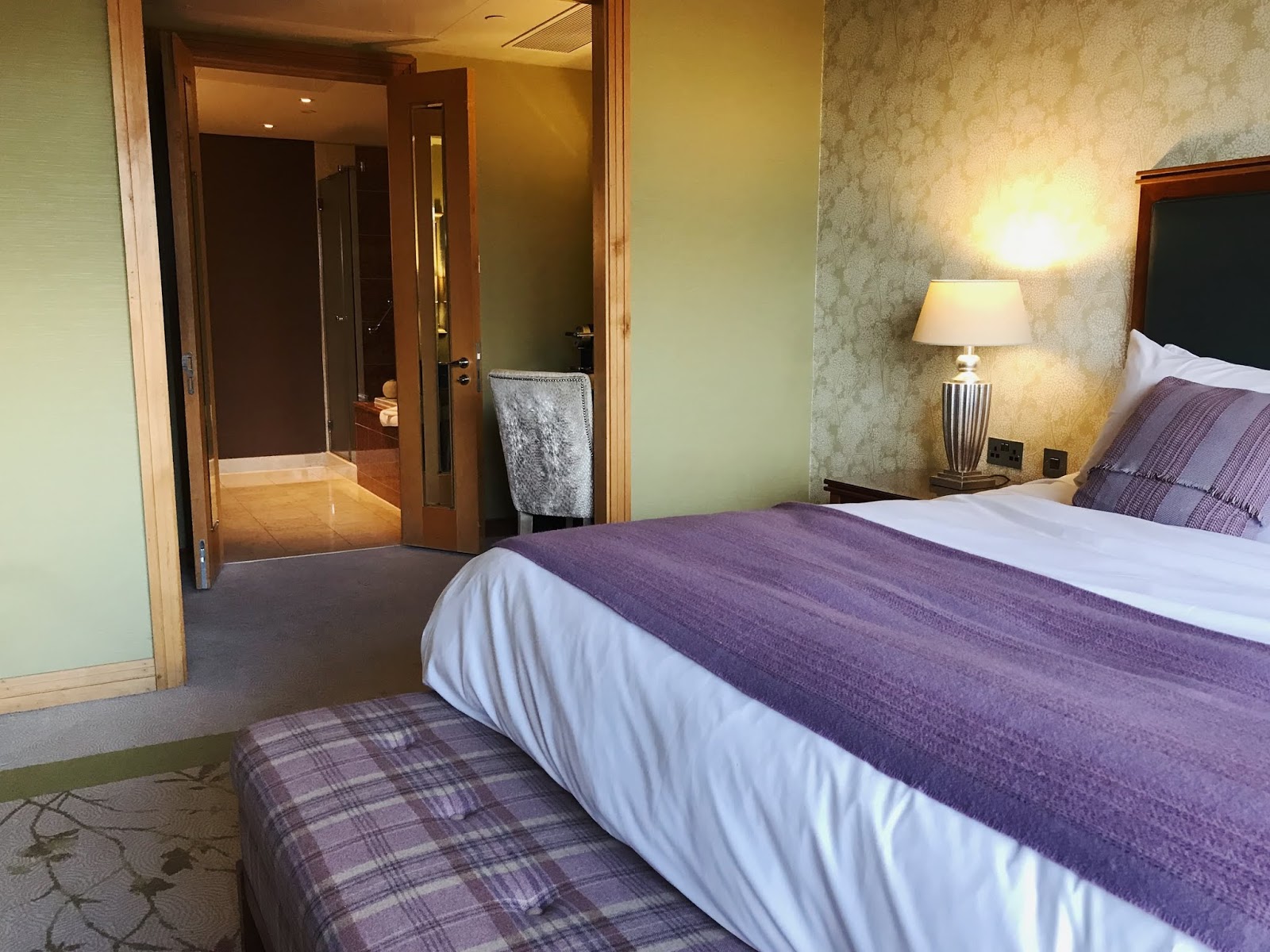 Then from the sitting room/lounge, there are sliding double doors into the bedroom. The bed was gigantic and super comfy, and again had an incredible view out of the window at all of the gorgeous scenery. I loved that the decor of the room had a bit of a countryside vibe to it without it looking dated at all, it was fresh whilst still feeling homely and cosy. The bedroom also had a huge tv which allowed us to plug in a USB stick so we watched a movie after dinner. Between the bedroom and the bathroom there was a dressing table and an impressive coffee machine set up with lots of nespresso pods and also a walk in wardrobe which had some slippers and the best robes I’ve ever worn. They were towelling on the inside but soft and fluffy on the outside and I definitely considered taking one home with me! 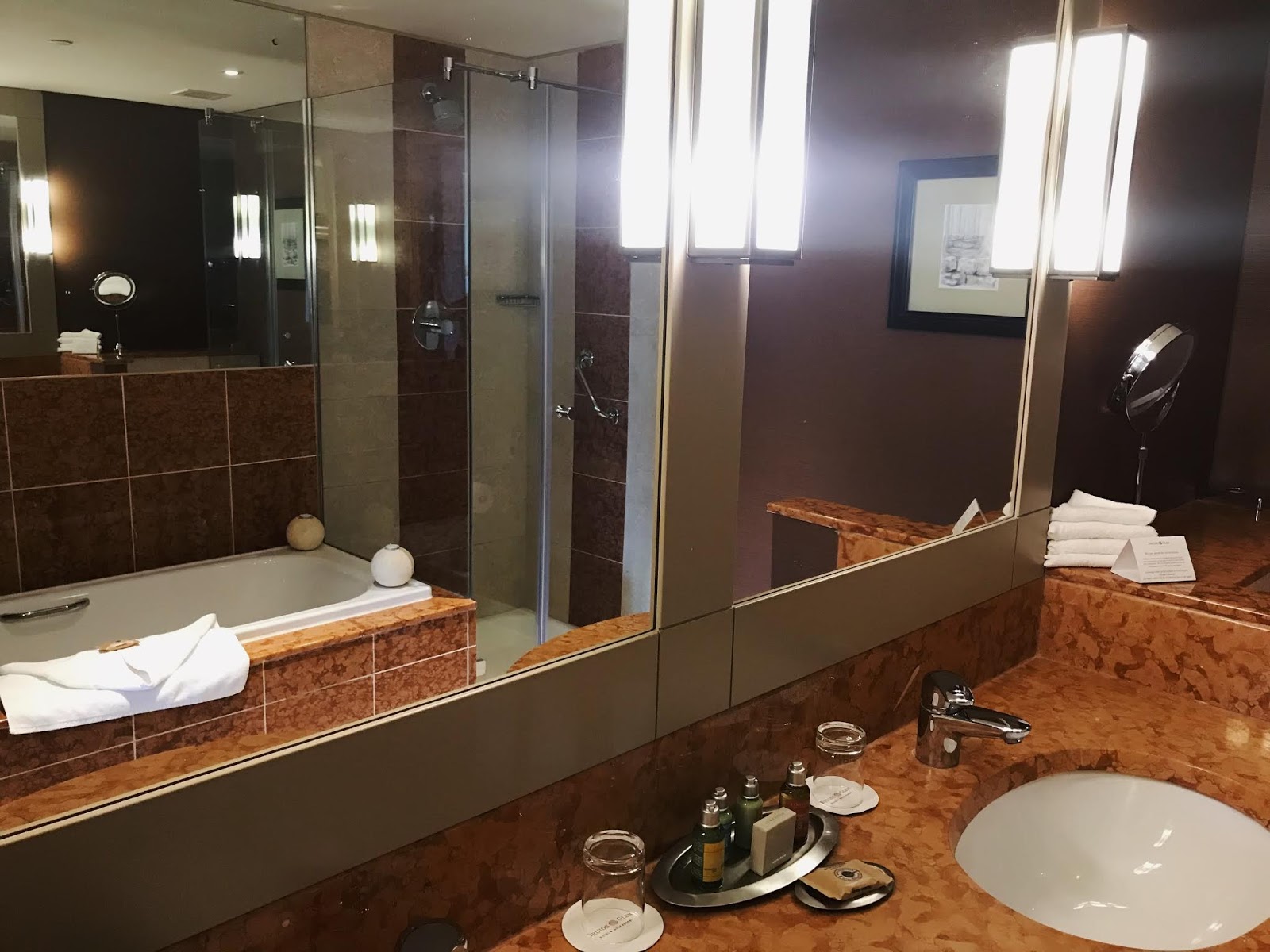 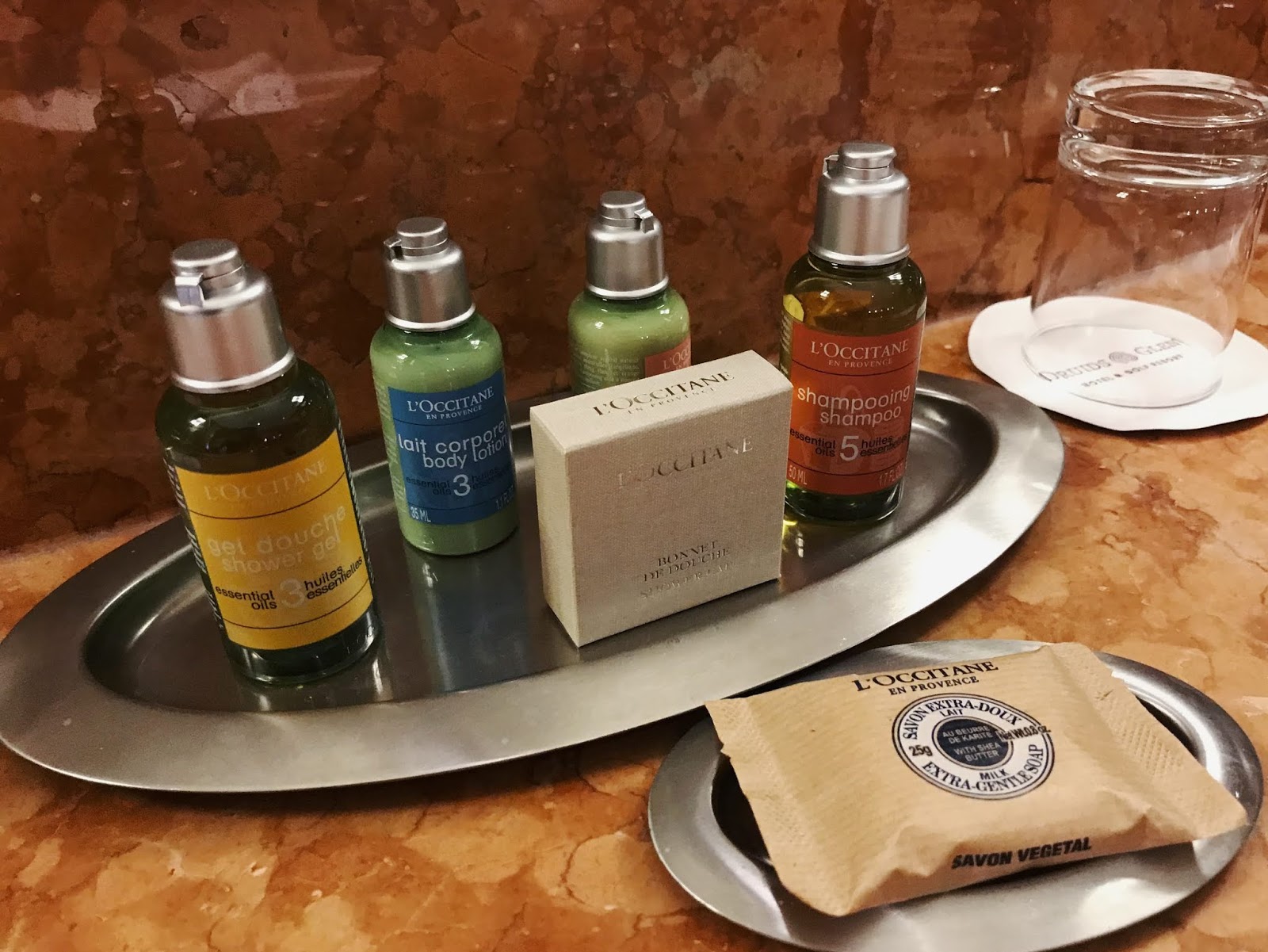 From the little dressing room area you then walked into the bathroom which had a double sink and a separate bath and shower which I always love because for some reason having a shower in a bath always makes me feel like I might fall over, but maybe I’m just weird! The best part about the bathroom was that there were L’Occitane en Provence toiletries which I was very impressed by as it’s a gorgeous brand and their products smell amazing. The bath even had little tea lights and holders for the ultimate bath time experience and anyone who knows me at all knows I love ALL of the candles when I have a bath, so I thought that was a nice little touch and something I haven’t seen in a hotel before. 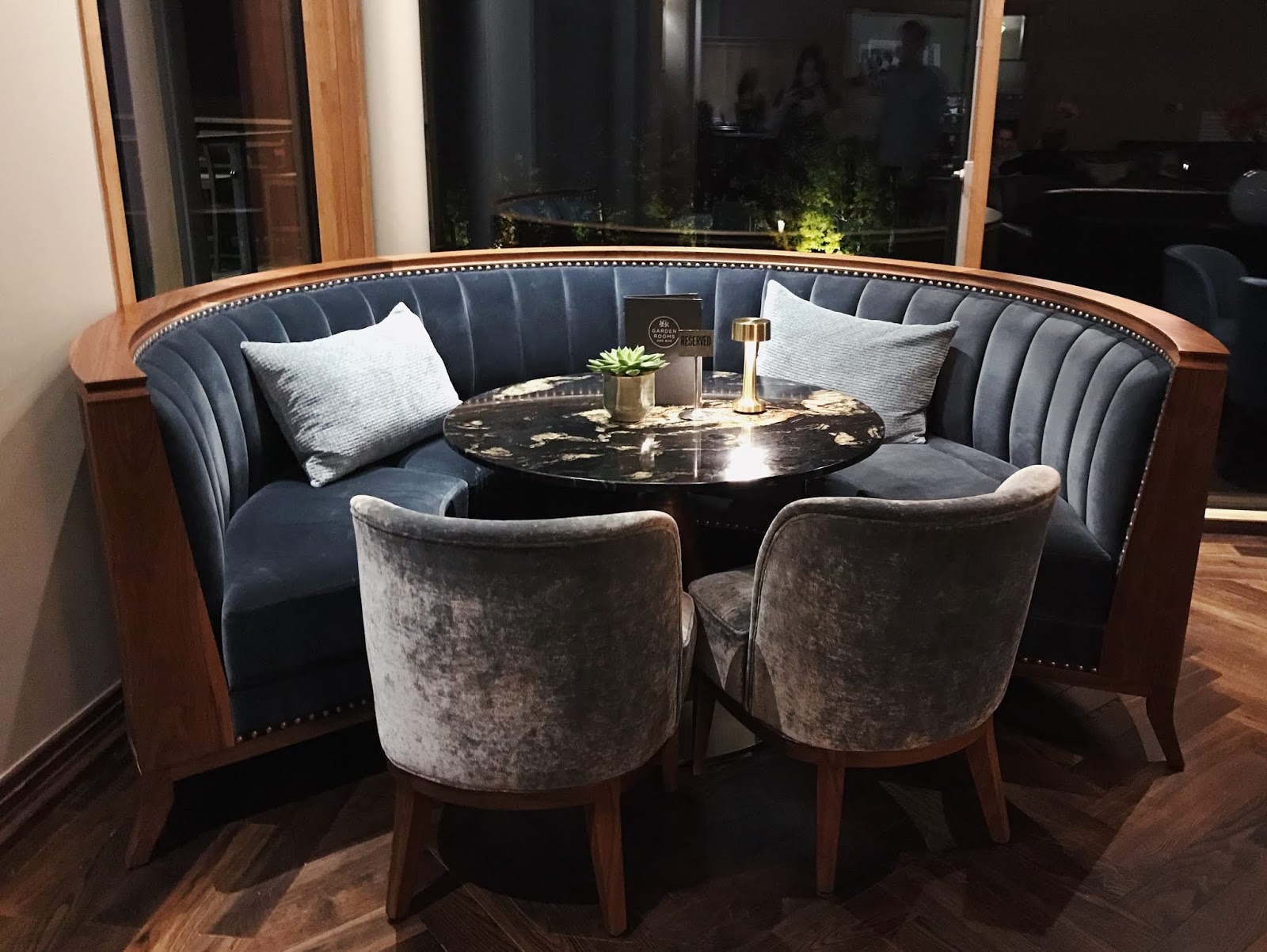 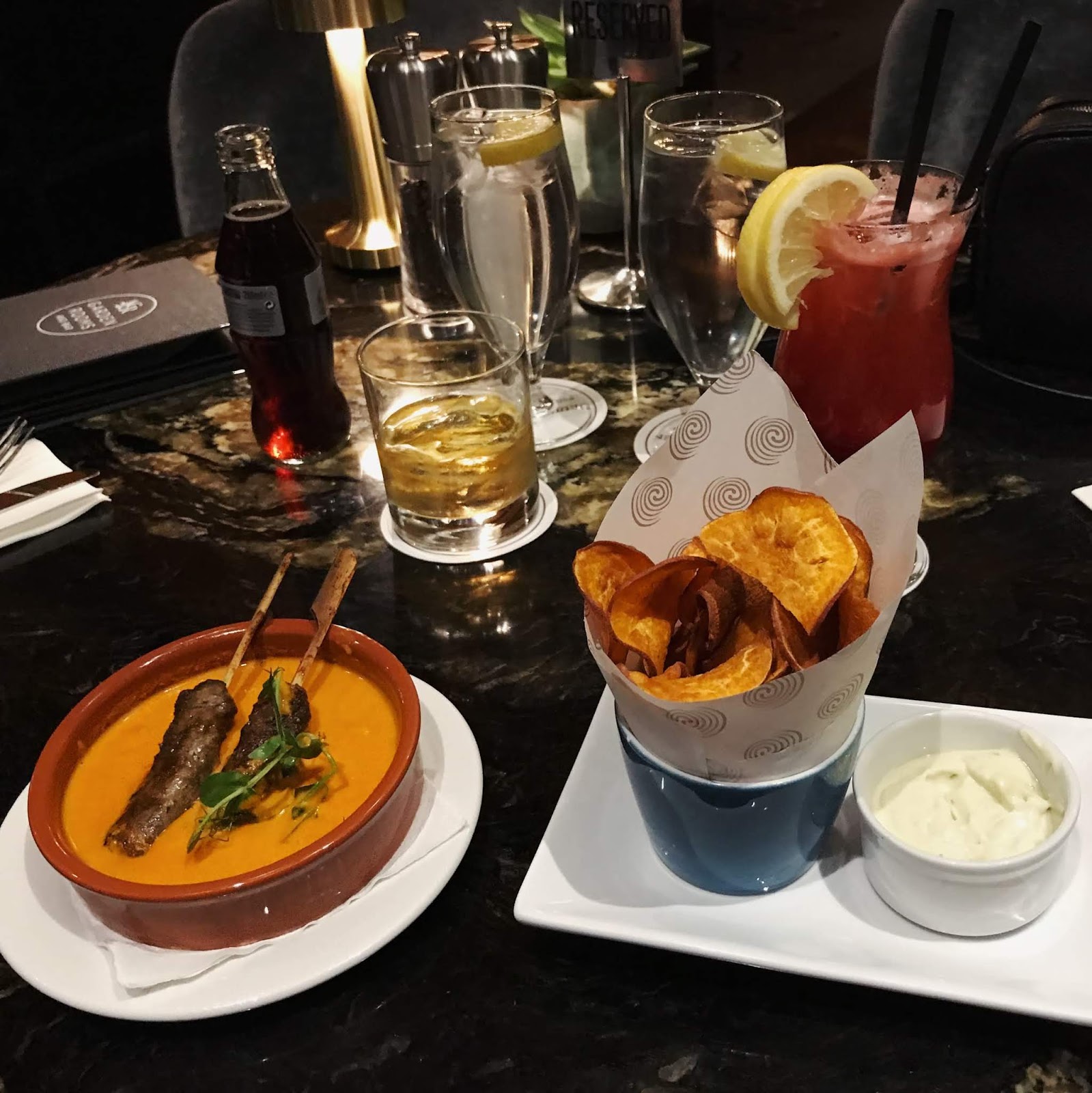 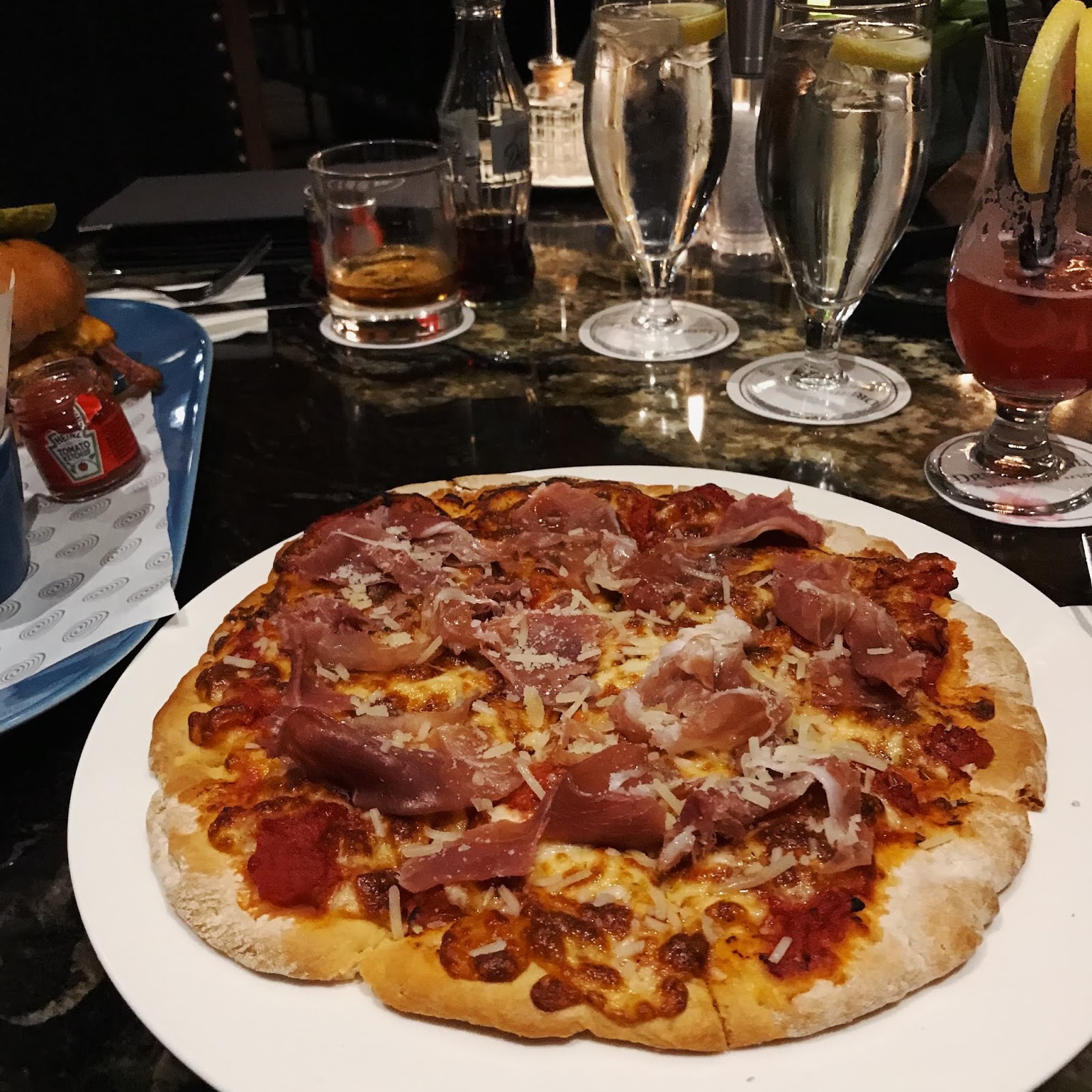 While Hugo’s in Druids Glen holds 2AA rosettes for culinary excellence, and I have no doubt that the food is incredible in there, myself and Dara like a much more relaxed, casual kind of dinner (yes, we are 5 years old), so opted for dinner in the newly refurbished Garden Rooms and Bar. The menu in here was right up our street, and certainly didn’t disappoint. The restaurant itself was also so well decorated, with blue velvet booths, gorgeous wood flooring, dark marble tables and mood lighting so good we felt like we were in a top class restaurant. I ordered the sweet potato chips for starters whilst Dara had the kofti kebabs and for mains I of course had to order the pizza and Dara ordered the burger. The best part by far was dessert, where I had the chocolate tart, but instead of having it with the mascarpone it should have been served with, I instead asked to have the toasted banana ice cream with it that I saw came with the sticky toffee pudding (which is what Dara ordered). Let me tell you, it was heaven in my mouth! I also have to mention Kevin who served us because he was so friendly and chatty and made us feel right at home. 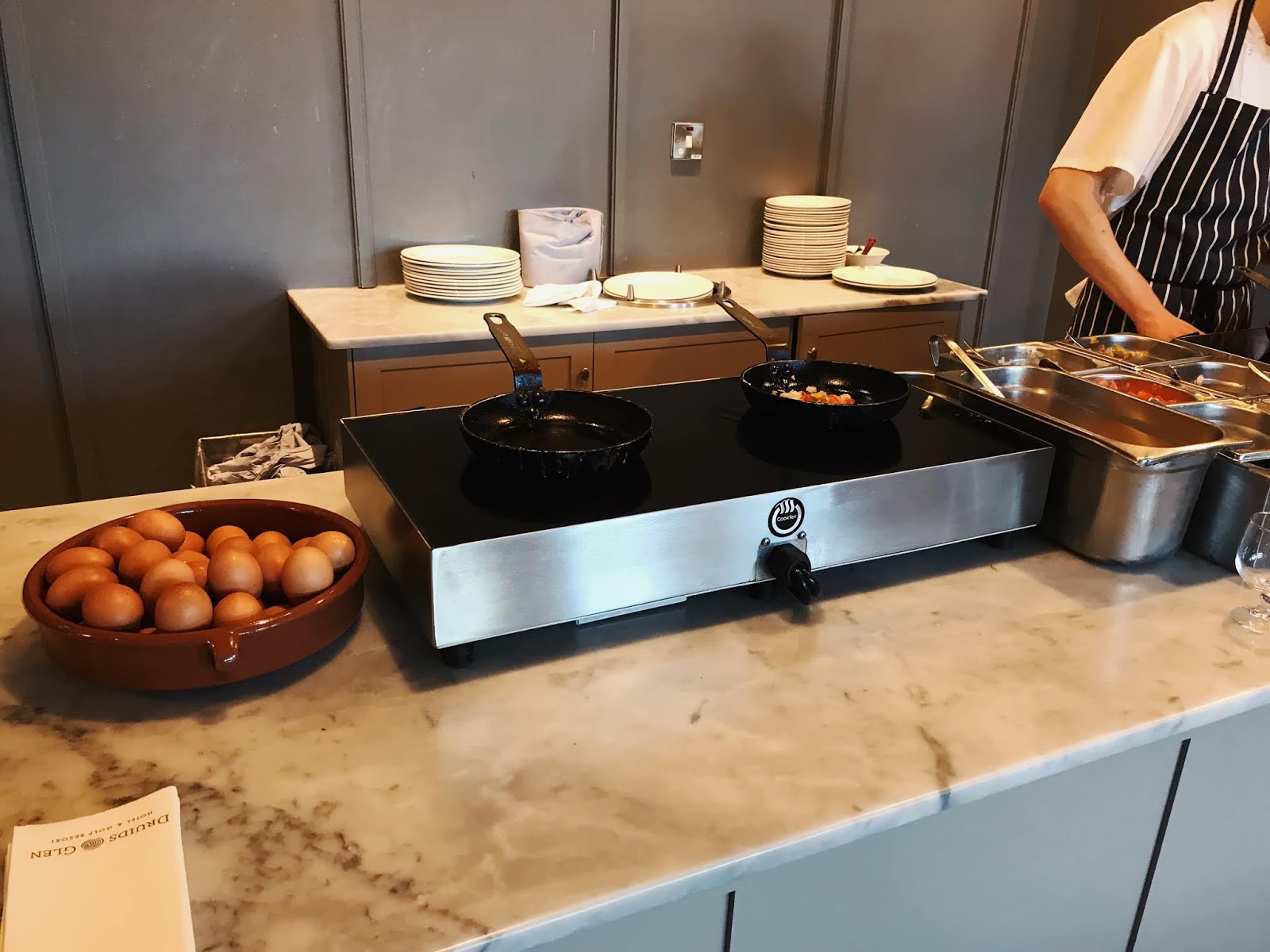 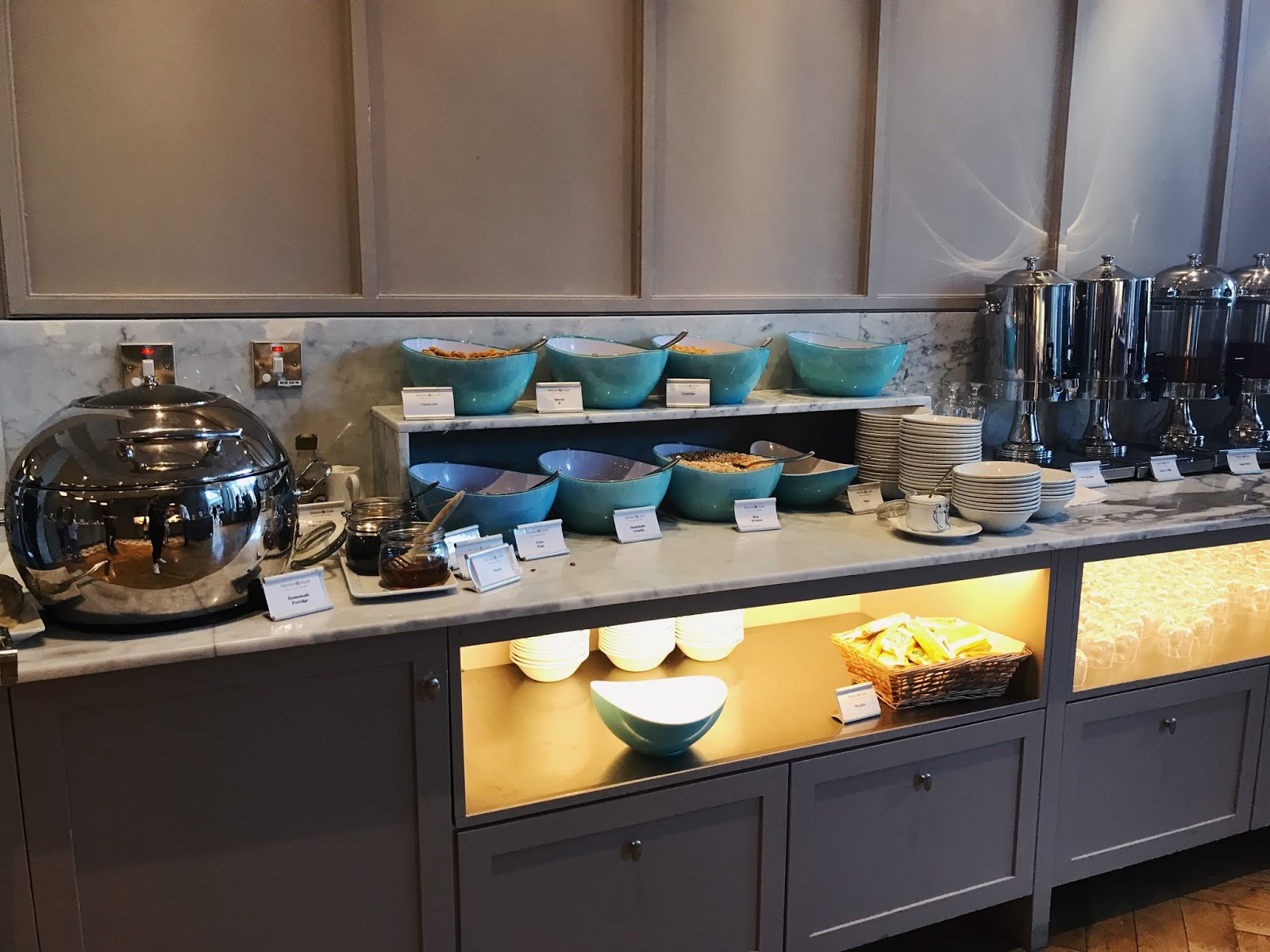 After such a lovely meal the night before, I had no doubts that breakfast wouldn’t disappoint and I was right. Breakfast was served in Hugo’s which was again decorated so well and was lovely and bright. The breakfast was a buffet (my favourite) with a little twist. They had an omelette station where you could pick what you wanted in your omelette and they would make it right there for you. Now I actually don’t eat eggs so I didn’t try this out but they also make pancakes at this station too which sadly I didn’t realise until we had finished our breakfast and I couldn’t fit another bite.

One thing I have to mention as well is that Druids Glen is just a 30 minute drive from Glendalough, although it felt much shorter because we drove through such stunning countryside. If you’ve never been, Glendalough is one of the most breathtaking places I’ve been to in Ireland and Dara and I did the Blue walk, which took us right up to the top overlooking both lakes. Definitely a bit of a trek to the top, and much harder than I thought it’d be but so worth it so if you’re thinking of staying in Druids Glen, definitely pencil in a visit to Glendalough too!

Druids Glen also has amazing leisure facilities and a spa that I actually had a good few messages from people recommending it on Instagram but between us wanting to be lazy and chill out for a bit and then our visit to Glendalough we didn’t get a chance to check them out, but what better excuse to stay there again eh?

I hope you enjoyed this little look into the Druids Glen Resort and a big thank you to them for having us this past weekend, it was just what we needed!