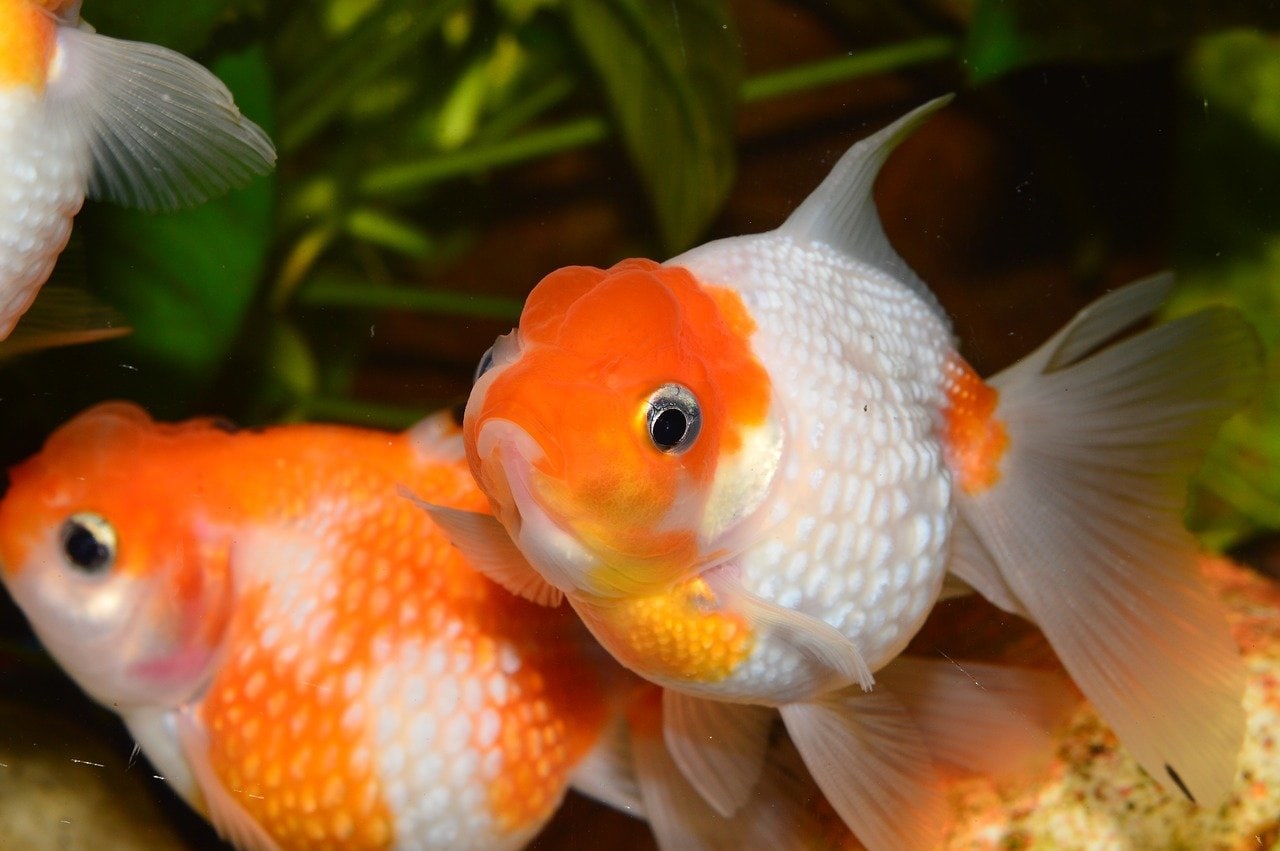 One of the main reasons people like to keep goldfish is that they are so tolerant. They aren’t as delicate or sensitive as some species. You won’t kill them if you forget to feed them one day or put off doing a regular water change. However, that doesn’t mean they are bullet-proof. Many things can adversely affect them.

In many animals, a behavioral change is often a red flag that something is wrong. A fish that hides all the time or doesn’t eat isn’t feeling well. Another sign that you may see in goldfish is a color change, going from its normal shade to a pale white. Bear in mind that it’s not necessarily a terrible sign. It can also mean something benign.

Goldfish are part of the Cyprinidae, or Carp, family. In the wild, they are a drab, brownish color that isn’t flashy, to not attract the attention of predators. As in all organisms, mutations happen. For goldfish, the result was the orange and red colors that we commonly associate with these fish. It’s part of the reason that the goldfish made it into the ornamental pools of Chinese royalty.

Goldfish didn’t cross the proverbial pond to the United States until the late 1600s. That ended up playing a significant effect on the spectrum of colors and body features that you can see in these fish today. Black, gold, calico, bronze, red, and white are all possible colors. When discussing a goldfish changing colors, it’s helpful to know what’s affecting what we perceive.

The color or colors of goldfish are influenced by the types of scales that they have, of which there are three: matte, metallic, and nacreous. Matte ones are just as the name suggests: flat and nothing showy. Metallic ones are a goldfish’s rendition of bling. They’re shiny and can reflect light and thus, color in different ways. Nacreous scales give varieties like the White Telescope its pearly sheen.

Guanine is a chemical compound in DNA. A specialized form exists under the scales of some fish. Because it refracts light, your fish may appear sparkling. Its presence also explains why the scales appear interconnected on the goldfish’s body and not as a group of individual pieces. Think of it as the glue that holds everything together.

The scales and guanine are the supporting cast of what ultimately determines the color of your goldfish: its chromatophores. These are cells that give color to various structures, including the eyes and scales. The distribution of the different types is part of a fish’s genetics.

Some animals, such as chameleons, can change color quickly in response to stimuli in the environment. Goldfish aren’t a part of that group. That’s why a fish turning white is unusual, especially if it happens rapidly. That’s not to say that it can’t occur, though. The goldfish’s ability is just a limited form of camouflage.

7 Reasons Your Goldfish Is Turning White:

Genetics comes into play as a goldfish matures. Remember that goldfish are domesticated animals that have been selectively bred for hundreds of years. If your fish is gradually turning white, it may be its DNA coming to the forefront. There is not a guarantee that your fish won’t change color as it matures. It isn’t a cause for concern because there’s nothing you can do about it.

On the other hand, certain things are worth investigating. Disease and parasite infections can cause color changes, such as goldfish velvet disease or ick. Fungal conditions can also be a culprit. We suggest monitoring your fish for other symptoms, such as clamped fins, appetite changes, and lethargy. That could identify a cause and thus, lead to a treatment.

Many animals change color based on the foods they eat. Flamingoes are a classic example. The vibrant salmon pink color that we associate with them comes from the beta-carotene content of the crustaceans they eat. If zookeepers didn’t offer these foods to them, the birds would be white instead of their usual hue. The same is true with goldfish. That’s why you see products marketed as being color-enhancing.

Stress is often a trigger for pigment changes that may provide better camouflage to protect vulnerable fish. Several things can cause it, from moving to a new tank to changing water conditions. Bear in mind that these animals inherited a keen awareness of their surroundings from evolution. It helped ensure its survival. Your goldfish’s instinct is to respond cautiously to new things in its world.

Goldfish aren’t unlike many animals that turn lighter as they age. They can live 10 or more years with proper care. In the meantime, they can show where they are on life’s journey by turning white as they get older. It typically comes on gradually and without any other noticeable signs. Of course, there’s not much you can do to stop time from moving forward.

Goldfish need UV light for their chromatophores to produce pigment. That’s why it’s essential to provide it via a lamp or hood. Otherwise, their colors will lose their luster over time, becoming duller and paler. This phenomenon goes back to the fish’s genetics. Remember that in the wild, they would be swimming in bodies of water where there would be ample sunlight.

Good water quality is of profound importance to fish, particularly dissolved oxygen. For your goldfish to thrive, the water must contain 5-6 ppm. Anything more or less will stress your fish, causing symptoms like turning white — if it lives that long. That’s why it’s imperative to monitor your tank’s water chemistry. Weekly testing will go a long way toward providing a healthy environment for your goldfish.

Your choice of treatment depends on what’s causing your goldfish to turn white. Many causes are beyond your control and not a cause for concern. Illnesses and water quality issues demand prompt action. You can find commercial products to treating diseases and parasites. It’s essential to use a product for the specific condition, whether bacterial, fungal, or parasitic.

We recommend using medications formulated for use with goldfish or koi. Follow the directions to the tee, particularly the dose based on the volume of your aquarium. Some require certain conditions to work properly, such as removing activated charcoal. You should also consider temporarily removing live plants that may get harmed by these products.

Creating a stress-free environment with the correct setup will help keep stress under control. Adding a UV light and providing a color-enhancing food will soon get your goldfish looking its best again. Bear in mind that these are lifestyle changes. If you stop either one, your fish will likely start turning white again.

Goldfish are excellent first pets for your children because of their easy care and tolerance. Color changes can denote either time, genetics, or a cause for concern. Observation will provide the answer for how you should respond. As long as no other symptoms are present, you can make dietary and tank adjustments and hope for the best.

Nicole is the proud mom of Baby, a Burmese cat and Rosa, a New Zealand Huntaway. A Canadian expat, Nicole now lives on a lush forest property with her Kiwi husband in New Zealand. She has a strong love for all animals of all shapes and sizes (and particularly loves a good interspecies friendship) and wants to share her animal knowledge and other experts’ knowledge with pet lovers across the globe.

How to Raise a Puppy: Diet, Exercise & More