7 Lessons Lowe’s Can Teach us About Social Media

Over the past year, Lowe’s social media efforts have been setting the world on fire, and I don’t say that lightly. They have master the Vine six second video, increased their Twitter following by over 50,000 and are close to 3 million likes on Facebook.

There are a lot of brands whose efforts are working, but I think Lowe’s is doing something really creative and unique, and consumers are taking notice. Their commitment to owning social media is chalk full of strategies that I think can benefit brands of all sizes.

I’ve spoken to my team at length about this, and here are our top seven social media strategies that we can all learn from Lowe’s.

One of the biggest mistakes brands make in their social media strategy is that they decide to repurpose content from one outlet to another. The problem with this strategy is that you’re not taking advantage of the true value of each unique social channel.

Lowe’s sees the benefits that each major social media outlet brings to the table, and posts the types of content that will work best for each. 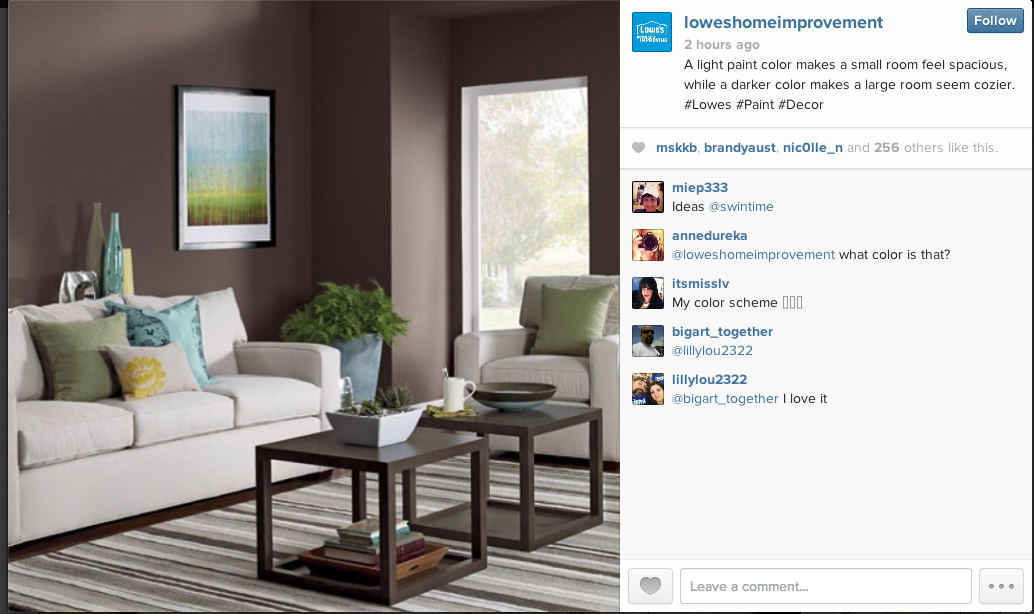 Twitter has pictures and conversations about making your living space better.

#QuickTip: If there’s a lot of natural light in your bathroom, choose a three-light fixture above the mirror. pic.twitter.com/oXicDaF90R

Facebook has ideas that are almost completely unrelated to the Home Improvement industry, yet still engaging to consumers. 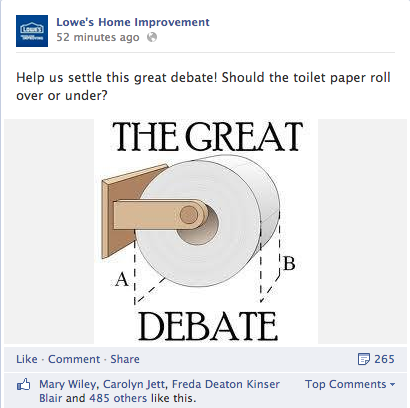 Their content is being published weekly, if not daily, and is almost always unique to its particular social media channel. This approach encourages viewers to come back for new ideas that they can’t get anywhere else.

The big point to take away here is that your brand needs to start viewing your individual social media channels as individual opportunities for conversation, education and storytelling.

I saw a statistic recently that said only 30% of brands are responding to direct comments on social media channels. This is baffling to me since companies are always trying to find ways to get closer and connect better with their audience.

If you go to Lowe’s Facebook page and look at the comments in their posts, you’ll see that conversations are actually happening between consumers and the Lowe’s brand. I’m not talking about canned responses to comments people post. I’m talking about actual, genuine interaction. 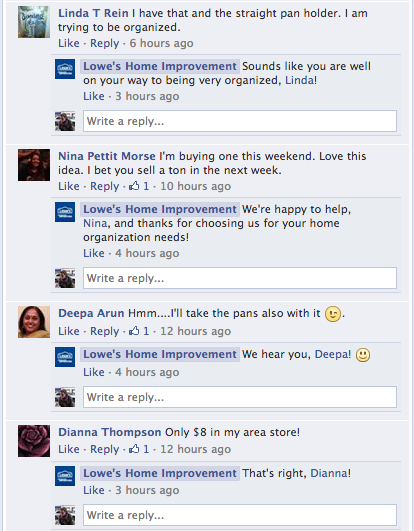 Lowe’s was even interacting with people on their social channels on Christmas Day. They are clearly not messing around. This kind of dedication will get you noticed.

Bottom line, if your consumers are commenting on your page or tweeting at your brand, you should be responding in a genuine and engaging way. Even small responses from your brand to a consumer can make a big impact on them, especially when it comes time to purchase in the future.

The purpose of social media is to be social, not to promote.

It’s always difficult for brands to engage on social media without overtly promoting their products. We feel the need to constantly post about our products and services thinking this will move our followers to action. The problem with this strategy is that the purpose of social media is to be social, not promote.

Lowe’s has broken this terrible habit, and it gives their social media presence an overall more genuine feel. They are giving people ideas that are relevant to their brand without directly pushing their products.

Without saying “Come to Lowe’s and buy our stuff,” they are educating people on projects they can undertake, which will in turn bring them into Lowe’s.

Lowe’s didn’t wait for Vine to accumulate 100 million users before joining. They became the king of Vine Mountain before many others showed up. The Lowe’s Fix In Six campaign is not only brilliant, it’s gutsy.

Using stop-motion videography, all of the videos are focused on some sort of DIY task that just about anyone could find helpful. Lowe’s took a risk by investing time and resources in a social media channel that didn’t have a large user base, and it worked.

When you only have 140 characters, 6 seconds or the length of a headline to grab someone’s attention, you have to be catchy and creative in a very small space.

Lowe’s knows they don’t have a lot of time to grab their audience’s attention, so their content is quick to digest, relevant to their audience and it keeps their consumers coming back for more.

You can employ similar methods by utilizing imagery, videos and other short pieces of content in your posts. Make sure your content is unique and relevant, and don’t be afraid to try some out-of-the-box ideas.

You may be surprised at how quickly creative content that is not asking for a sale can draw attention from consumers who will inturn want to purchase form your brand.

6. Develop a Quick Approval Process to Push Content Out Faster

One of the most common problems I see in companies of all sizes is their extensive approval process for social media content. Part of the reason Lowe’s has been successful is their quick turn around. They are able to rapidly publish content and rapidly respond to comments.

I was just talking with one of my colleagues, Beth Willbur, and she mentioned that Lowe’s responded to her multiple times when she tweeted at them. 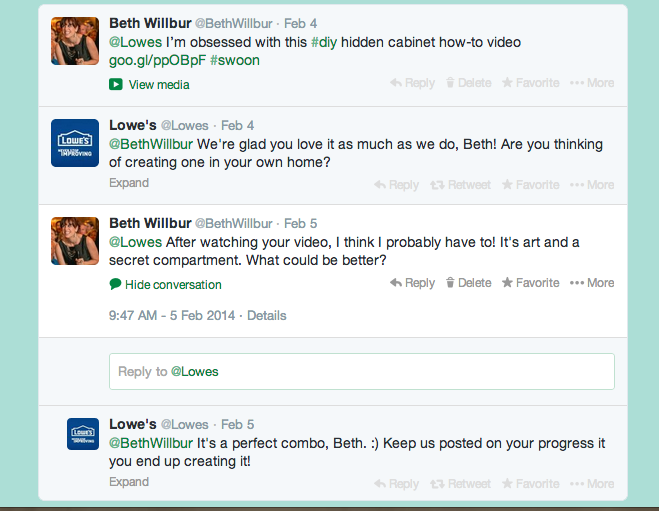 Notice how they aren’t just responding, but are actually initiating further conversation.

You can have the most compelling content, but if you can’t respond in real time because you have to go through 10 different chains of approval then you’ll lose a lot of opportunities to actively engage with your consumers.

Social media is about what is happening right now. Develop guidelines for your brand’s voice, then hand over the reins to your marketing team or agency so they can help your brand be an active source for conversation in social media.

7. Put Actual Humans Behind the Wheel

This might be the number one reason Lowe’s has been so successful. When you look at Lowe’s social media presence, it’s clear that there are actual people behind it, which makes the brand feel smaller and more relatable.

They have removed the distance between the big box brands and the end consumer. They have instead become a trusted advisor, a friend even, with tips and tricks for the projects their consumers want to complete. What an awesome testament to the power of social media.

Automating responses and social media interactions makes it very difficult to build a social following. Lowe’s is being proactive and knows how to communicate about what is trendy, relevant and important to their audience.

You might be saying, “Well of course Lowe’s is doing so well, they’ve got a vast amount of resources and a large budget.” I agree that money does help, but it is clear that Lowe’s has a good strategy and is committed to it. There are plenty of companies who have similar budgets but aren’t nearly as committed.

Find where your audience is living on social channels, and commit to being there. One of the best ways to be found is to contribute to the conversations you want to be part of.

We’d love to hear from you in the comments below. What other things do you think can we learn from Lowe’s efforts? Or tell us some of your company’s social media best practices.

My Weight Loss Journey {How I Lost 100 Pounds}